Published on August 28, 2012 by Tanstaafl in Age of Treason Radio 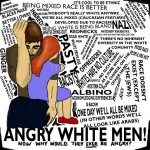 This installment addresses some feedback to the two previous installments, in the attempt to clarify and fill some gaps.

Also, I finish quoting and saying what I have to say about Identity Politics (Stanford Encyclopedia of Philosophy):

A richer understanding of political subjects as constituted through and by their social location was required. In particular, the history and experience of oppression brought with it certain perspectives and needs that could not be assimilated through existing liberal structures. Individuals are oppressed by virtue of their membership in a particular social group—that is, a collective whose members have relatively little mobility into or out of the collective, who usually experience their membership as involuntary, who are generally identified as members by others [ie. biological identity, race], and whose opportunities are deeply shaped by the relation of their group to corollary groups through privilege and oppression (Cudd 2006).

Oppression, then, is the systematic limiting of opportunity or constraints on self-determination because of such membership: for example, Frantz Fanon eloquently describes the experience of being always constrained by the white gaze as a Black man: “I already knew that there were legends, stories, history, and above all historicity… I was responsible at the same time for my body, my race, for my ancestors” (Fanon 1968, 112). Conversely, members of dominant groups are privileged—systematically advantaged by the deprivations imposed on the oppressed. For example, in a widely cited article Peggy McIntosh identifies whiteness as a dominant identity, and lists 47 ways in which she is advantaged by being white compared with her colleagues of color. These range from being able to buy “flesh-colored” Band-Aids that will match her skin tone, to knowing that she can be rude without provoking negative judgments of her racial group, to being able to buy a house in a middle-class community without risking neighbors’ disapproval (1993).

Critics have also charged that assimilation (or, less provocatively, integration) is a guiding principle of liberalism. If the liberal subject is coded in the way Young (1990) suggests, then attempts to apply liberal norms of equality will risk demanding that the marginalized conform to the identities of their oppressors.

The take-away for Whites: “Identity politcs”, as such, is a jewish, cultural-marxist, anti-White construct. It is wrapped in dishonest universalist-sounding rhetoric, but is in fact defined and deployed solely in opposition to Whites. The essence of its notion of identity is victimization – with Whites portrayed, in a variety of ways, as oppressors, and non-Whites portrayed as oppressed.