A 2nd Conversation with Andre

Published on February 12, 2013 by Carolyn in The Heretics' Hour

Published on February 9, 2013 by Carolyn in Saturday Afternoon with Carolyn Yeager

Published on February 7, 2013 by Carolyn in The International Jew Study Hour

Race and Fraud: The Races of Mankind – Part 1

Published on February 5, 2013 by Tanstaafl in Age of Treason Radio

Picking up from the last installment, more on Ruth Benedict and Gene Weltfish’s anti-“racist” pamphlet The Races of Mankind.

The Editor’s introduction from Tales for Little Rebels: A Collection of Radical Children’s Literature, by Philip Nel, Google Books:

In 1948, Weltfish and Violet Edwards, under the supervision of Benedict, adapted Brotherhood of Man for In Henry’s Backyard: The Races of Mankind, illustrating it with images from the cartoon.

The New York Times Book Review . . . disagreed with the book’s central claim of racial equality . . . also discredits the authors on the grounds that both work in anthropology, “not a true science at all, but . . . a kind of specialized reportage.”

From the 1930s through the 1960s, the FBI believed opponents of racism were also Communists. As David H. Price points out, what “were scientists like Gene Weltfish to do” when America’s main political parties condoned Jim Crow racism and “the Communist Party’s position on racial equality was in total alignment with the scientific findings of biological and anthropological research”?

the activism of Benedict and Weltfish was rooted in the empirical methods of scientific inquiry, not in the procrustean confines of ideological doctrine.

Only a few small portions of the book itself can be made out. Here’s one:

sensible people learn to live in peace and friendship. They know that the differences in the way people behave are not inherited from their ancestors. They come from something called cultural experience or environment.

The artist in the original pamphlet was Ad Reinhardt, Wikipedia:

Adolph Frederick Reinhardt (“Ad” Reinhardt) (December 24, 1913 – August 30, 1967) was an Abstract painter active in New York beginning in the 1930s and continuing through the 1960s. He was a member of the American Abstract Artists and was a part of the movement centered around the Betty Parsons Gallery that became known as Abstract Expressionism.

Reinhardt is best known for his so-called “black” paintings of the 1960s, which appear at first glance to be simply canvases painted black but are actually composed of black and nearly black shades.

In science and philosophy, a just-so story, also called an ad hoc fallacy, is an unverifiable and unfalsifiable narrative explanation for a cultural practice, a biological trait, or behavior of humans or other animals. The pejorative[1] nature of the expression is an implicit criticism that reminds the hearer of the essentially fictional and unprovable nature of such an explanation. Such tales are common in folklore and mythology

Benedict was a folklorist.

The Races of Mankind, Internet Archive:

The World is Shrinking

The war, for the first time, brought home to Americans the fact that the whole world has been made one neighborhood. All races of man were shoulder to shoulder. Our armed forces were in North Africa with its Negro, Berber, and Near-East peoples. They were in India. They were in China, They were in the Solomons with its dark-skinned, “strong”-haired Melanesians. Peoples of all the races of the earth became our neighbors.

Americans know better than most how much hard feeling there can be when people of different races and nationalities have to live together and be part of one community. They know that there is often conflict. When what we all wanted more than anything else was to win- this war, most Americans were confident that, whatever our origins, we would be able to pull together to a final victory.

Science and the Race Front

In any great issue that concerned the war we turned to science. When we needed new fuels, substitutes for rubber, lighter metals, or new plastics, we asked scientists to tell us what was possible and what was impossible. The chemists told us how to make the plastics we needed, and the physicists told us how to detect and locate an approaching airplane, and the engineers told us how to build a better fighting plane. When we were faced with war shortages, they told us what essential materials we had been throwing out on the dump heap.

This booklet cannot tell you all that science has learned about the races of mankind, but it states facts that have been learned and verified. We need them.

The Bible story of Adam and Eve, father and mother of the whole human race, told centuries ago the same truth that science has shown today: that all the peoples of the earth are a single family and have a common origin.

No difference among human races has affected limbs and teeth and relative strength so that one race is biologically outfitted like a lion and another biologically outfitted like a lamb. All races of men can either plow or fight, and all the racial differences among them are in nonessentials such as texture of head hair, amount of body hair, shape of the nose or head, or color of the eyes and the skin.

After the discovery of America by Columbus, Europeans began traveling to every quarter of the globe, and all the new peoples they met were complete strangers to them. For one thing, the Europeans couldn’t understand their languages. They looked and acted strange. Europeans thought they were different creatures and named a lot of different “races.” Gradually the Europeans described each one as having a skin color, kind of hair, kind of lips, height, and head shape that was peculiar to that “race.” Nowadays we know that this was a false impression.

Interview with Andre of Total Fascism

Published on February 4, 2013 by Carolyn in The Heretics' Hour

Should questioning motives and methods be called “infighting?”

Published on February 2, 2013 by Carolyn in Saturday Afternoon with Carolyn Yeager

Published on February 1, 2013 by Tanstaafl in Blog 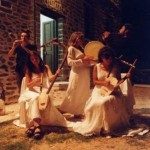 This month’s special program features the music of Daemonia Nymphe, and will be broadcast each Wednesday, Friday, and Sunday starting at 9PM ET and streaming until the next scheduled program. Enjoy.

From Daemonia Nymphe at Wikipedia:

Daemonia Nymphe (Δαιμόνια Νύμφη) is a Greek music band established in 1994 by Spyros Giasafaki and Evi Stergiou. The band’s music is modeled after Ancient Greek music and is often categorized as ethereal, neoclassical,[1] neofolk, or gothic.[2]

Daemonia Nymphe uses authentic instruments, including lyra, varvitos, krotala, pandoura and double flute, which are made by the Greek master Nicholas Brass.[3] Their shows are very theatrical, with members wearing masks and ancient dress. Their lyrics are drawn from Orphic and Homeric hymns and Sappho’s poems for Zeus and Hekate.

The music has been transcoded from Top Tracks for Daemonia Nymphe at YouTube:

(Note: There is no audio download for this program – please tune in via the MP3 Stream.)

Comments Off on Daemonia Nymphe