Published on October 2, 2013 by Tanstaafl in Blog 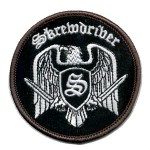 This month’s special program is a Skrewdriver mix. It will be broadcast each Wednesday, Friday, and Sunday starting at 9PM ET and streaming until the next scheduled program.

LOUD and PROUD. These are forthright, defiant, inspirational anthems extolling blood and soil nationalism and racialism for Europeans.

Skrewdriver were a White Power band formed by Ian Stuart Donaldson in 1977 in Blackpool, United Kingdom.

The program was transcoded from 1 Hour Skrewdriver Mix at YouTube. The songs in the mix are (some of these are alternate versions):

The spirit of Skrewdriver is well captured by WHITE POWER (not included in the mix):

Saga’s Son of Britain (not included in the mix) is an ode to Ian Stuart Donaldson: